Niall Mac Coitir of the Dublin Branch of the IWT led a tree walk around Marlay Park in Rathfarnham on Saturday 8th October, to mark National Tree Day which fell on the previous Thursday  6th October. The weather was lovely for the event, a fine autumn day with a mild breeze and sunshine and over twenty people turned out. Niall took people on a circuit around the park, showing some of the fine trees, both native and non-native, that Marley Park has to offer.

The walk included a stop at a particularly fine mature oak tree. The oak is the backbone of Irish forests, supporting a whole ecosystem of native Irish life. The walk heard how there are very few native woodlands left – around 1% of the land of Ireland. A widespread story has it Irish oak forests were all cut down to supply the British navy. While this was a factor in the destruction of Irish woods, the main factor was that the island had to support a population of eight million at one stage and every square metre of ground was farmed. Another important factor is that many oak woods were cut down to provide charcoal. Oak makes very good charcoal, which was needed in ironworks as part of the smelting process.

Niall also spoke about the rowan or mountain ash, and how its red berries were traditionally seen as a powerful deterrent to the fairies and other bad influences. A magical rowan tree featured in a story about the lovers Diarmuid and Grainne, which involved poor Diarmuid fighting a fierce giant to get some of the berries of the tree for Grainne. The berries of the tree had the property that whoever ate them would stay forever at thirty years of age. Hearing that, some of the older members of the group cast a longing eye at the berries hanging from the tree before them, but unfortunately it was time to move on!  Niall also showed the group a fine specimen of an ash tree and pointed out that a well grown tree is needed to make a hurley, as it must be cut from the part of the tree where the trunk curves into the root. This is so that the grain of the wood will curve naturally from the handle into the bas of the hurley.

Another tree mentioned was the chestnut tree which is not native to Ireland, but comes from Turkey and the Balkans. Before it arrived in the last few hundred years as an ornamental tree  to Britain and Ireland, children would play the game of conkers with snail shells – hence the name ‘conkers’ which comes from the Latin concha or shell. Among the other trees seen on the walk were scots pine, birch, beech and yew, and by the end of the talk everyone had learned a little more about some of the trees that can be seen on a walk through our parks and woodlands. (photos courtesy of Chris and Joy) 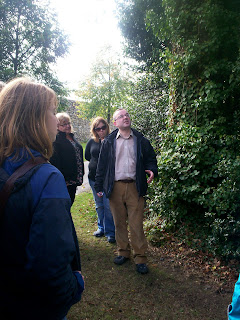