About forty people braved the cold and snow showers on Sunday Jan 20th to attend the IWT Dublin Branch's birdwatching event at Bull Island's causeway. The event was lead by Niall Keogh and Sean Kelly, who brought along a few telescopes for everyone to get a really good look at the wintering birds feeding on the mudflats.  Our persistence was rewarded with a view of some really beautiful birds, including ducks such a group of shelduck, and lots of teal and wigeon. Plenty of waders were in evidence too, such as redshank, sanderlings and godwits. Lapwings, plovers and oystercatchers were on show as well. Also in attendance was a hooded crow/ carrion (black) crow hybrid, which apparently is a regular visitor to that spot over the last few years. Ornithologists are divided on whether the hooded crow and carrion crow are different species or just variations of the same species, and our crow wasn't telling!

But the highlight of the day came near the end, when the cold was beginning to bite. Just by moving a hundred metres up the coast, the group were rewarded by the sight of a flock of pintails, amazing looking birds in their striking black/dark brown and white striped markings. All in all, well worth venturing out into the chill of January! 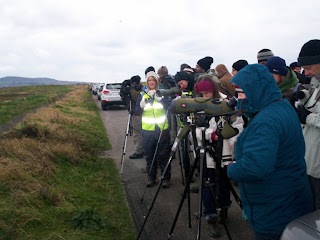 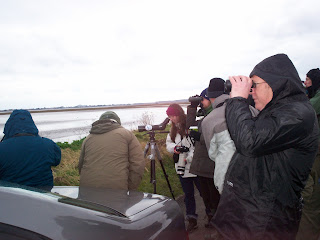