On Saturday 18th July Dublin Branch member Niall Mac Coitir led a walk on Bull Island to see some of the many beautiful wildflowers in bloom at this time of year. The group saw four orchids on the walk - common spotted orchid, pyramidal orchid, marsh helleborine and twayblade, a little green orchid with delicate pale green flowers. Also to be seen on the walk were many species of the pea family, which can grow on poor sandy soils like the Bull Island because they can make their own nitrogen from the air - flowers such as rest-harrow, birds foot trefoil, hares foot clover, and meadow vetchling. There were also many other species to be seen such as ladies bedstraw, fairy flax and centaury.  All in all a good day was had by those attending, and even though the weather was a bit blustery it stayed dry. Photos courtesy of Brendan. 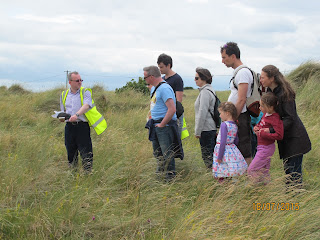 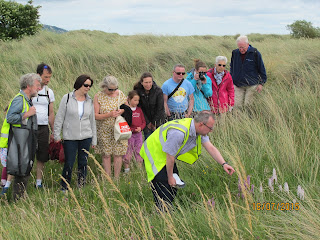