On Sunday 29th January about fifteen members of the Dublin Branch braved the cold and the rain to attend a bird watching event led by birding enthusiasts Sean Kelly and Niall Keogh on Bull Island - Dublin’s well known nature reserve. They were rewarded for their efforts by seeing a variety of birds - lapwings, redshanks, black-headed gulls, knots, teal, shovelers and Brent Geese among them. Bull Island has an excellent range of coastal birds, especially its overwintering flocks which come to avail of the many invertebrates (worms and things)that live in the mudflats. Niall Keogh explained how Dublin's Brent Geese are unique because of their lack of fear of humans compared to the geese on the continent- probably due to the fact that they won't be shot on sight! So much so that they have been known to get in the way of golfers trying to play on the Island's golf courses. Dublin's Brent Geese have also taken to grazing on the city's open spaces and playing pitches in a big way, to the extent that this is now a major source of their food supply.
After about an hour the freezing cold and rain put an end to the outing, but enough birds had been seen to make it all worthwhile. 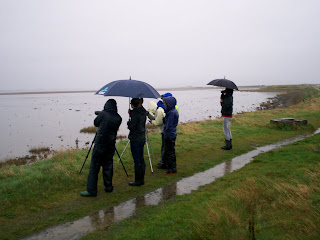 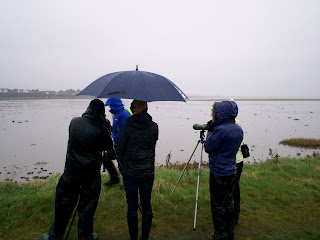