The Green Drinks talk this month was given by Conn Flynn, Conservation Officer with the IWT, who set out the situation regarding badgers and TB in Ireland and explained the IWT's campaign against badger culling. Conn informed the thirty or so people present why the IWT is so opposed to the government's policy of culling and why vaccination is a better, more effective and humane alternative. There are about 70,000 badgers in Ireland - an average of about one badger per km2 and about 30,000 setts. The government has culled a massive 90,000 badgers since 1984, so much so that the badger's existence in Ireland may be threatened, and yet despite this the numbers of cattle infected with TB have barely fallen.

A £50 million scientific study in England carried out over 10 years found that badger culling made no difference to TB infection rates, and can even make things worse by causing infected badgers to flee to new uninfected areas. Furthermore Scotland has managed to stay free of bovine TB without having to carry out culls at all. The real key to reduction is controlling cattle movements, and in particular, to test animals before they are moved to another location - something which is not done in Ireland at the moment.

Alongside this there should be vaccination of badgers to remove them as a source of infection, as a humane alternative to the unnecessary and cruel killing of badgers by catching them in snares and then shooting them, as is done at present. Although the Department of Agriculture has begun a small trial programme of vaccination in Monaghan, the large scale culling of badgers is continuing despite the evidence and the IWT has begun a campaign to petition the government to stop culling for good. You can sign the petition by logging on to the IWt's website at www.iwt.ie 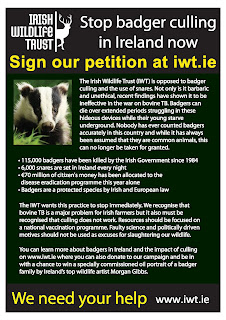