On Sunday 15th of April about twenty IWT members turned out on the Causeway road on Bull Island for an event led by Sean Hogan, an experienced birdwatcher. The North Bull Island is a UNESCO Biosphere Reserve, RAMSAR site and a Special Area of Conservation. Sean had some telescopes on standby and those present got to see and identify Bar and Black-tailed Godwits in their reddish-brown summer plumage, Shelduck, Mallard, Little Egret, Teal, Curlew, Heron and Brent Geese among others.

Sean was a mine of information, and even those who thought they knew a thing or two about birds learned a lot that they did not know before. For example, unlike other ducks, Shelduck lay their eggs in burrows and later each year leave their chicks a hundred at a time in a 'creche' with one of the adults while the others head off to a safe offshore sandbank to moult their feathers. Sean also talked about the Little Egret which is a recent arrival to our shores, only having started to breed in Cork in 1997. Since then it has spread north through Ireland and can be seen regularly around Dublin Bay. The Bull Island and other tidal estuaries like it are a huge source of protein for seabirds, especially in winter. In fact each square metre of mudflat contains more protein than the equivalent size of rainforest! (Photos courtesy of Niall) 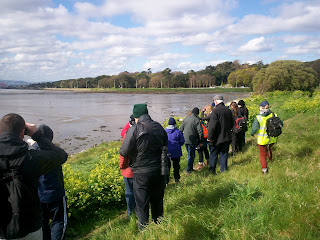 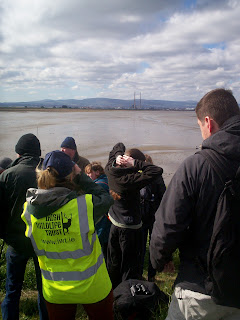 Sean also had some advice about binoculars and telecopes. The rule of thumb for binoculars is that when you divide lens size by magnification the result should be more than 5 e.g. lens size of 42 and magnification of 8. The crucial factor is the amount of light that the lens let in. A decent pair of binoculars can be got for about €100 - 150 and it is important to take the time to try out different kinds to find the one that suits, as each person's preference is different. Regarding telescopes good options are zooms lens with magnification of 20 to 60 or alternatively a wide angle fixed lens of about 32 magnification. A good one won't be got for less than € 200 and the sky is the limit for the more expensive ones.

The best guide books are 'Complete Guide to Irish Birds' or 'Pocket Guide to the Common Birds of Ireland' , both by Eric Dempsey, or the 'Collins Bird Guide to birds of Britain and Europe'

After seeing the birds of Bull Island the group crossed over to St. Anne's Park to hear some birdsong. Coal tits, wrens, robins and blackbirds were heard, and for a few moments there was great excitement when it was thought that woodpeckers had arrived in the park! Alas it turned out to be Grey Crows pecking at the branches of a nearby tree to get building material for a nest. Despite that minor disappointment the group went away very happy with what they had seen and heard, and a lot more knowledgable.
Posted by Dublin Branch at 12:16