A goodly number of IWT members turned up for this event led by Conn Flynn, our Conservation Officer, who was ably assisted by birding enthusiast Arthur Doyle. Before walking around the sanctuary Conn talked about the importance of the marsh for birdlife and he also gave us a brief account of its interesting, somewhat chequered, history. The site which is protected under EU environmental legislation is described by some as a unique patch of wilderness within the confines of the city of Dublin.

Beside different species of waders (among them Redshank, Greenshank, Godwit) and ducks (teal, mallard) we spotted a pair of swans, some Brent Geese, a number of Grey Herons, two Little Egrets, a moorhen as well as some common urban species (Wren, Tit, Finch). We even noticed a swallow busily collecting mud for its nest. Altogether a most pleasant outing. 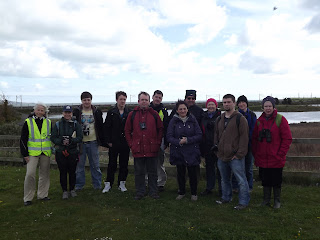