The Dublin Branch went on a tour of the National SEA LIFE Centre in Bray on Saturday June 23rd. This special guided tour of the aquarium with a dedicated SEA LIFE expert brought the group face to face with a Giant Pacific Octopus, sharks and many other creatures. This year’s new feature of the aquarium is a trail of rays featuring Ireland's only Cownose Rays. The tour took about an hour and afterwards IWT members and members of BirdWatch Ireland gathered on the beach for an Oceans 2012 campaign fish-shape photograph! 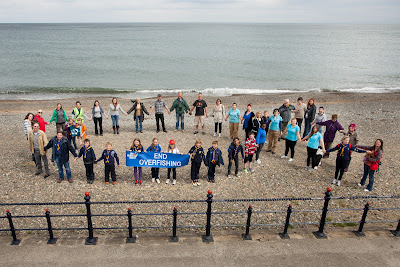 Email ThisBlogThis!Share to TwitterShare to FacebookShare to Pinterest
Labels: Coast and Marine, Ocean 2012