On Sunday the 12th of August the Irish Wildlife Trust held a beach safari led by Kevin Delahunty at Portmarnock beach. The beach safari was based mainly around the rock pools and began at 10:30 as the tide was low, making the rocks pools easily accessible. There was a brilliant turn out with lots of parents bringing their children along to learn about the different species we have on our rocky shores.

We began by investigating what creates the small casts along the beach and discovered that they are created by lugworms. After digging one up and explaining their life cycle to the children, we were off to the rock pools in search of other species. And we were in no way disappointed!

We found lots of different species as the rock pools in Portmarnock contain a huge amount of wildlife. We very quickly found a number of common gobies and common prawns. One young wildlife enthusiast even caught a flounder in his net! We also collected many shore crabs from tiny to quite large.

Kevin talked about the different molluscs we had on our shores as we examined limpets, mussels, periwinkles and dog whelks. We were treated not only to beadlet anemones with full tentacle extension but also to some tube anemones as well.

IWT was also to team up with CFT for the event in order to include a snorkel and discover what other species we have under the water as well as above. However do to bad weather conditions and a very rough sea the snorkel had to be cancelled. This will be rescheduled at a later date so keep checking the blog and our facebook page to find out when!

Many thanks to all who came out and made it a really great morning on the beach. 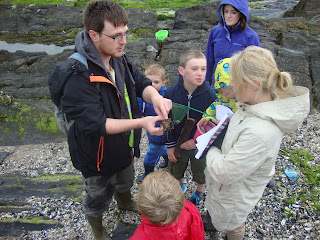 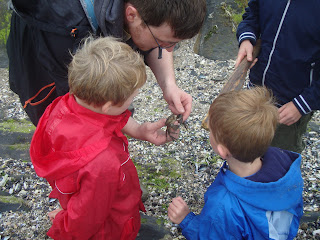 Email ThisBlogThis!Share to TwitterShare to FacebookShare to Pinterest
Labels: Coast and Marine