This month Dublin Branch Green Drinks heard Ineke Scholte of frackingfreeireland.org talk about the controversial issue of fracking. At the moment exploratory licences have been granted to companies in Ireland north and south of the border to look at possible sites for fracking. This has generated local opposition from those opposed on environmental grounds, but proponents of fracking say that it will reduce our reliance on fuel imports and generate much needed local employment.

So what is fracking? Fracking is short for hydraulic fracturing which involves pumping a mix of water, sand and chemical under huge pressure into gas bearing rocks. The first step in the process involves drilling a shaft to reach the shale layer, sometimes as deep as 2.5km. Small explosions are then set into the shale layer fracturing it. The water, sand and chemicals are then pumped in at high pressure to enlarge the cracks and release the gas. Supporters of fracking say that this can be done safely and has been done in many places before. Opponents of fracking say that it is an inherently risky process and can contaminate ground water and destabilise local geology, and that it has never been done in a country with a geology like Ireland's.

After Ineke's presentation, a lively and sometimes heated discussion followed between those in favour and those against fracking. The arguments for and against fracking involve very technical issues, and also the broader issue of whether fracking can act as a bridge to tide us over until renewable energies come on stream, or whether it is actually a distraction, helping to postpone action on renewables. The discussion ended without agreement except that people should inform themselves further on this very important issue. 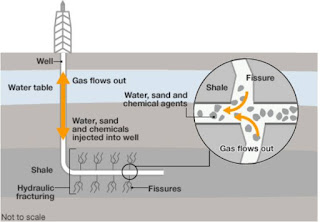 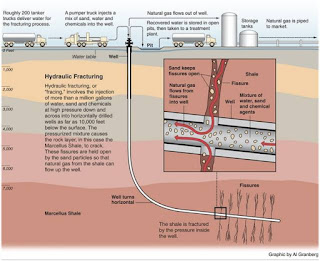