On Saturday May 23rd the Dublin Branch celebrated Biodiversity Week 2015 with a walk in St. Anne's Park, Raheny with Dublin Branch member Niall Mac Coitir. The weather was bright and sunny and a there was a good turnout to hear Niall talk about some of our native trees, wild plants and birds - and some creepy crawlies too! Among the plants Niall showed the group was wild garlic, lords and ladies or cuckoo's pint, (Arum maculatum),  herb robert (used as a traditional cure to stanch bleeding), primroses and wild bluebells. Trees such as the yew, beech and hawthorn were also featured.

The walk took in the old pond to look at the ducks, and followed that with a visit to a wooded part of the park to see a heronry, and hear the little egrets make their strange bubbling or 'gobbling-like-a-turkey' calls. Finally an old log was turned over to see lots of woodlice, black beetles and centipedes scurrying about - a big hit with the small kids who were present! 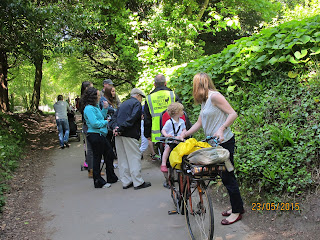 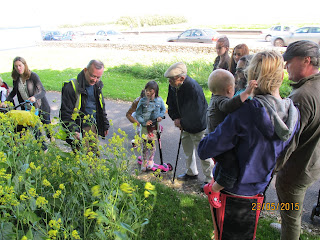