This month's Green Drinks invited Kilian Murphy, a student of TCD along to talk about the controversial question of whether the wolf could ever return to Ireland. Thanks to rural depopulation and legal protection the wolf has returned to many of its old haunts across Europe, and now every country on Mainland Europe, including Belgium and the Netherlands, is home to wolves. Not everyone is pleased about this of course, and compensation schemes are in place to ensure farmers are not out of pocket when their livestock are taken by wolves. Changes to farming practices, such as better fencing and using sheepdogs can also reduce much of the predation caused by wolves.

Kilian talked about the situation in Ireland and whether the wolf could ever return here. His belief is that conditions are not right at the moment, but there are suitable habitats in remote areas of the west of Ireland where the wolf could return, provided there was a proper management scheme in place. But it won't be happening anytime soon, and a big part of the problem is that people need to be educated about the true nature of wolves. They are not the vicious man eaters of popular myth, but intelligent, social animals that pose no threat to humans. 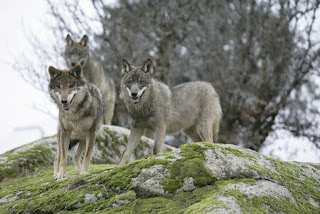