Green Drinks 3rd March 2020 - Putting the Bite back into Biodiversity?

The March Green Drinks talk was by Adam Francis Smith, who has a degree in Zoology and Master's on deer ecology from UCD. Adam has talked and written about mammals in Ireland, and is currently studying wolf and lynx populations for a PhD fellowship in Germany with the Frankfurt Zoological Society/University of Freiburg. Adam will talk about conserving our native predators, and about the possibility of reintroducing some of those we have lost. Time for the wolf to come back?

Adam gave a very interesting talk where he talked about the benefits of returning the wolf to Ireland as a keystone species that would help enormously in restoring wildlife habitats, by controlling deer numbers for example. But there are numerous obstacles to this at the moment, not least in winning the support of landowners and the general public. Reintroducing wolves would also have to be an All-Ireland initiative, as wolves don't recognise borders! Adam concluded by saying that, while it may not be practical in the short term for this to happen, in the long-term there is a realistic possibility of bringing back the wolf, if the right policies are pursued. 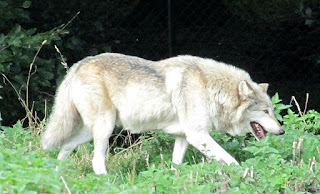 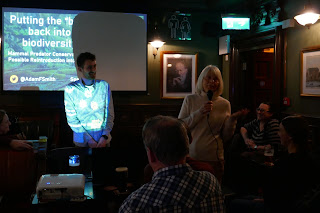 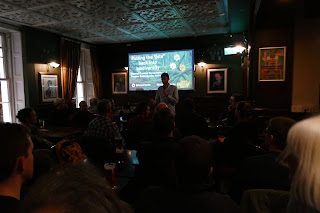