The Irish Wildlife Trust Dublin Branch held a Creepy Crawly Workshop and Walk in the Phoenix Park on the 21st October to coincide with the scariest time of the year – Halloween!!

We started out by setting up some pitfall traps the day before. They were loaded up with some rotten fruit and meat in order to attract as much insects and bugs as we could! These were covered over with some wood to prevent any rain or small mammals from getting into the traps.

The day of the Workshop was bright and dry. Perfect weather for some bug hunting! We had a great turn out with over 20 kids attending along with their parents (who were just as interested as the kids!). The children were given a bug viewer, an insect colouring book, an insect key and a Badger Club magazine to kick start their creepy crawly interest. We started off with Kevin Delahunty explaining all the equipment that we were going to use and how they all worked. The kids were very interested in the beating trays, pooters, pitfall traps and sweep nets that we had to show them.

The first stop was to the pitfall traps (which we had emptied beforehand into a tray so they were free of rotten food!). The kids all gathered around to see how they worked. We then showed them what we had found in the trap which included some slugs, a ground beetle, some small spiders and even some eggs which a fly had laid on a piece of the meat. We then moved on to the beating tray and the children had a fun time shaking branches to see what fell out onto the beating tray. They were given pooters to suck up the insects to identify them. This was followed by a sweep net demonstration in some tall grass. The children then spread out to search for some insects on their own using their bug viewers and some borrowed pooters. They found a huge range of insects including several species of spiders, a harvestman, a millipede, several species of snails, some worms, a 7-spot ladybird, a cranefly and lots of froghoppers and woodlouse. Overall it was a great day and everyone enjoyed themselves and hopefully we sparked some lifelong bug interests in the children (and maybe some of the adults). 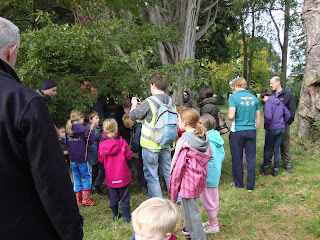 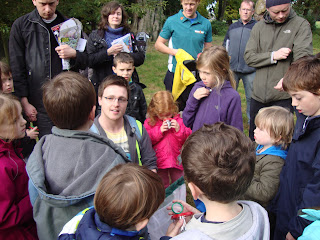 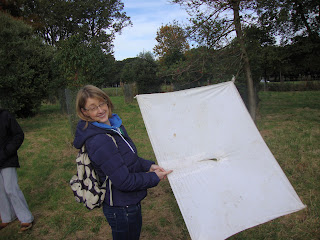