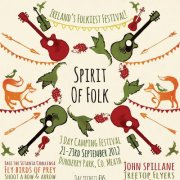 The IWT had a presence at the Spirit of Folk Festival in Navan on 21- 23 September last. We arrived at the festival early Friday morning and to a warm reception from the staff,  which included a couple of the many friendly dogs on site, who were roaming around in crew and security jackets. The staff campsite was filled with trees and two donkeys who were only too happy to relieve us of any juicy apples we may have had.  After dropping off our camping equipment, we began setting up our stall in the main area. We hadn't even  finished when someone shouted and pointed up to the sky. To add to the excitement of day one of a festival, we saw not one but an entire family of buzzards! Two adults soared overhead with two juveniles with them.

The atmosphere among the group was of sheer joy. The music was great with friendly faces all around. Our species sightings board also became full quite fast, with all sorts of wildlife from squirrels to frogs and shield bugs to donkeys! We were all surprised by the sighting of Ireland's native Smooth Newt, not near the water as you might expect but rocking out at the main stage beside one of the benches! The weather during the day was warm although as the day progressed to night this began to change first to slightly chilly and then to absolutely freezing! It was time to wrap up as much as possible and attempt to get a good night sleep in preparation for day two.

Once the stall opened there was a steady flow of interested people coming up to ask general wildlife questions. Some people showed a keen interest in gaining some new knowledge about Irish wildlife with particular interest being shown in our badger campaign. The children were very interested in our arts and crafts and many “Super Bugs” were made out of clay, beads and shells. Our animal quizzes proved a great source of fun and humour as the kids tried to name all the animals to win some free sweets. These quizzes were of particular interest to some children, who became very familiar faces over the course of the weekend and managed to charm us out of many sweets and lolly pops.  We had some people coming back to tell us what they had found in the woods and even some people talking about the wildlife in their area and around their homes. Our design-your-own wooden medallions were very popular and before long almost every child at the festival could be seen with one around their neck.

The wildlife event of the day took place at 2PM when Tim Clabon led a very informative wildlife walk through the woods and around the pond. There was a great turn out leaving the stand and although we lost some people along the way, we were joined by others as well. After a short walk through the woods describing the different shrub and tree species and the corvids (crows) overhead it was time for some sweep netting and collection of insects with the use of a pooter. There were many species collected including orb spiders, harvestman, beetles and some parasitic wasps. The inspections under moss covered logs brought up centipedes and millipedes and the pond dipping also proved fruitful with the addition of water beetles and pea cockles. We rounded off the day watching a blind date show involving some people from the festival and some questionable karaoke.

After a second chilly night we were up early to start the day back at the stand answering more questions and losing more sweets to children. We all took some time off to visit the falconry display. The falconers involved us in holding and feeding the birds of prey including Harris Hawks and a beautiful Eagle Owl. The involvement of children in the display was done very well and everyone seemed to be really enjoying themselves. After this display it was time to bring on the awareness of Ocean2012 and sustainable fisheries. We rounded up a huge group of people to make a fantastic fish shape and followed this with a talk by Kevin Delahunty on the problems of overfishing and how it is affecting you. There was a good turnout for the talk and a good few questions asked and answered throughout and after it. As the sun began to sink in the sky it was time for our own Conn Flynn to give a talk in one of the tents about the IWT's badger campaign. The talk was attended by some farmers, some of who disagreed with all of the points brought up and there was an enjoyable discussion to follow. After the talk it was time to begin packing up. It was dark as we left the festival and headed home for a much needed rest.

Email ThisBlogThis!Share to TwitterShare to FacebookShare to Pinterest
Labels: Festivals